Hi, everybody! Every month I’ll do an indie book review, and this is my first one!

This book is sci-fi, which is something I never read! It is nice to go out of my comfort zone a little. Also, it is dystopian, which I really like. I love to imagine the destroyed society after we end with it.

However, I do have to say something about this book.

But, first, let’s see what Amazon is saying:

Welcome to the No Limits Race.

In the near future, 16-year-old Kaiden Reed makes a bold and dangerous decision to enter the most brutal sports competition on the planet. One in which he will undergo a radical upgrade and become a new kind of athlete and a new kind of hero.

All Kai wants is a shot at a better life and to impress the girl of his dreams. But the stakes in the Race are higher, and the choices tougher, than he ever imagined. The physical challenges are just the beginning.

Does Kai have what it takes to compete? How far will he go to win? And should he trust the person who recruited him in the first place – or is she using him to carry out a bold and dangerous agenda of her own?

“Designed for YA readers, yet reaching for a broad audience SAND RUNNER is a top-notch read, especially for those dedicated fans of THE HUNGER GAMES and THE MAZE RUNNER.” — Publishers Daily Reviews

“If you’re at all into THE HUNGER GAMES and other YA books published in the last decade, you should do yourself a favor and get this book. It’s an easy, exciting read that will keep you reading until the end. It certainly did for me.” — A Goodreads review

Get your copy of SAND RUNNER now.” 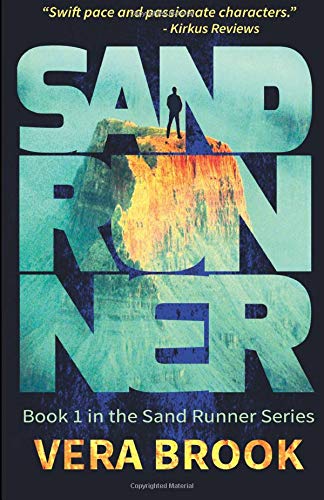 Before we start, I must say that the cover is AMAZING and it was what sold it to me.

When I saw it was about a boy, filled with action, I bought it. You know I love my boys. And the main character’s name… Kaiden, being called Kai. I LOVED the name. I also want to steal it now in homage!

However, I have some things to consider.

When Hunger Games came out, I thought it was the most brilliant thing ever written. I LOVED the social critic. A society that didn’t care about if teens were dying, they actually loved to watch it… the sponsors, the bizarre society with its excesses.

It was very cool.

However, many years later, I keep reading this same old formula. Again and again. It is not original anymore.

There were some differences, for example, Kai had a choice. He didn’t need to go to the Race if he didn’t want to. He chose to go because he had nothing to lose from his old life. Point to that. I love when characters make choices. Also, the racers are not there to die exactly.  In Hunger Games, you know that they are there to die. Only one will survive. This is not the case here, which I also liked. I love when authors are original with their stories.

However, the Sponsors, the wicked society, how everything is controlled by a powerful organization, people have almost no free-will. I’ve seen this all before. Many. Many. Many times. The way the runners are interviewed, the bets, the way that absolutely nobody seems to care that the race is extremely dangerous and everybody could die… come on, isn’t there any non-governmental organization that protests for runners lives?

Let’s start the review in an organized manner:

He was the best from this book by far.

He’s witty, sarcastic, he thinks quickly. You want to read more about him, to get to know him better. He is not afraid to face what is coming, he knows what he wants and he goes after it. He is not driven by the circumstances, instead, he creates the conditions. He doesn’t get no for an answer. He is angry, but not in a ridiculous way. I liked him so much. I really cared about him.

He is the best part of the book in my opinion.

I couldn’t stop reading thanks to him! I would think about him during my daily activities. I really fell in love with him.

These are a bit of a problem.

There are many other characters. None of them are very well-developed. Some I don’t even understand why they exist. Kai has a “mentor” from the beginning of the book. He shows up once and, then, never again. I don’t get why he is even there.

He has friends and a girl he likes from back home. They also show once and never again, except for once, when he meets the girl again. I didn’t even get why he did that.

Also, there’s a guy that helps him to train. He irritated me by calling him “mate” all the time, he also doesn’t have a strong personality. I don’t understand if he was good or bad after all, which is sometimes good, but in this case, it was just because he was bland.

I didn’t care a bit about the other runners. I barely could tell them apart, really.

The scientist girl had a backstory that actually didn’t matter much.

The sponsor is the typical mean boss from the movies. That type of businessman that you don’t trust.

The reporters… they also almost have a backstory but, then again, not developed. It didn’t match the main story.

There was the first girl to be a runner. She had so much potential. Not explored at all. She became just another one of the runners.

There’s the mean bully runner that the sole purpose of his existence is to be mean to Kai.

There’s a disabled person on a wheelchair! I loved that! Except for the fact that the disability is not embraced and it is looked at a problem that must get fixed…

ALSO, Kai is an orphan.

You know how I feel about orphans.

If you don’t, let me tell you: this is one of the worst clichés in Young Adult.

The only reason for authors to kill the parents is to be an easy way for the protagonist to do whatever they want without anyone caring and to create an easy “traumatic past”. Really?? Also, I don’t think the author even mentions how the parents died besides “an accident”. This is how much the parents mattered to the story.

Just to make it clear, I don’t read books with this kind of cliché. I only went through the rest of it after I saw he was an orphan because I loved Kai. But this was an exception to my rule.

The only worst thing to orphans is love triangles. I WAS SO AFRAID THAT THIS WOULD BE THE CASE IN HERE.

However, the romantic interest was not the best either.

I KNEW he would fall in love with the character from day one. It felt a bit forced to me. However, it wouldn’t bother me if it wasn’t for the fact that it TOOK OVER THE STORY.

I was here for an action-filled dystopic adventure.

Kai falls in love and ALL he thinks about is the girl. She becomes his sole motivation to win the race.

This was so sad to me. It wasn’t even organic, it felt forced and out of place.

The WORST part of the Hunger Game is the love triangle. People ignore the social critic, the fact the book was written to criticize the war, the way that we sit back in our homes while soldiers die, and they focus in TEAM GALE VERSUS TEAM PEETA.

This makes me SICK.

It was NOT the case in Sand Runner.

BUT, the romance did spoil the book for me.

I have to say that I found this book much more gore that I was expecting to the point that some scenes made me physically sick.

It is NOT a light read.

I would go as far as to say that it should have a disclaimer because one of the MAIN parts of the book is very, very, very gore. VERY. GRAPHIC. There are some descriptions that I would LOVE to FORGET. It has to do with the robotic parts. It could have happened in a different way, really.

However, this all disappears in the race.

Some scenes are very nice, filled with adventure. The action is great! I love the scenarios. The part where Kai trains are very technological and the author creates cool places that I wish I was able to meet.

I won’t spoil it to you!

There are strong points and not so strong ones like I mentioned. Kai is a great character, there are some well-thought places and scenes! If you like romance, adventure, sci-fi, and dystopian worlds, go ahead and give it a try!

If you want to read it, there you go:

Ps: this is my Amazon Affiliate link, if you buy through this link, I receive a small commission with no additional cost for you and you help support this blog.